Yu Chia Huang is a theatre maker, writer  and producer from Taiwan, passionate about telling interesting and funny stories to raise attention of critical situation around the world through theatre for both children and adults. Find her works below.

As a theatre maker, a director, a writer and a puppetry specialist, Yu-Chia graduated from MFA Theatre Directing of East 15 Acting School in London in 2018 and BA Drama Department of National Taiwan University of Arts in 2015. As a theatre director and writer, her first Edinburgh Fringe and the UK debut A Cockroach and Furry Blurry Fluffy Things has got ★★★★★ five stars reviewed by The WEE Review in 2018. Founded Team Furry Tails and registered the company as NGO in Taipei, the company's debut puppetry show got Taiwan premiered in Taipei Children's Arts Festival in July 2019. Having been studied in the UK, Taiwan and Indonesia, fluent in English, Chinese Mandarin, Japanese, Hakkanese and Taiwanese languages Yu-Chia's works across nations and beyond languages. Her aim is telling the stories to all the nations around the globe. Discovering social issues around the world, her company Team Furry Tails is making theatre for the youngs in our times.

Past directed and assistant directed productions of Yu Chia Huang

Produced, Created and Directed 'A Cockroach and Furry Blurry Fluffy Things' in Edinburgh, London and Taiwan

'Henry - A Work In Progress' a devised theatre piece premiere by Blind Summit Theatre, performed by Mark Dawn in Wimbledon College of Arts Theatre in January 2018. Blind Summit is one of the leading puppetry theatre company in the UK. I worked as an assistant director in this one man puppetry show project. Story as follows, 'Luke Chessel, the world's greatest puppeteer, brings his father Henry, a celebrated actor back from the dead in puppet form for one night only to tell a story of his glorious career and their tragic estrangement.'

Made A Shadow Puppet Show 'The Cat's Dream' In Bali

Visiting Bali is part of the course in East 15 Acting School MFA Theatre Directing program. In May of 2017, I stayed in Bali for 1 month for briefly learning and exploring Balinese Topeng mask performance and Wayang shadow puppetry. I wrote, designed, created this short shadow puppet show for 2-4 years old children with group of Balinese local artists, musicians and professional puppeteers. Balinese shadow puppets made by leathers, I made a gecko and a cockroach by their traditional technic. In 'The Cat's Dream' show, I created a fantasy world on the air of Bali in a cat's dream. A cat is really afraid of geckos, which are involved in Balinese people's daily life that they believe that if gecko makes voice during people having dialogue it means that the gecko approve what they're saying.

'Holy Crab!' a new play written by Yi Zhu, directed by Ching Hsiang Yang was performed in Well Spring Theatre Taipei, Taiwan in the April of 2016. I worked as an assistant director in this project. On the Playwright Yi Zhu's website the description of the play is 'A dark comedy that explores the multi cultural reality and identities of many people living in America through the crazy journey of a Chinese Mitten Crab, a sea creature who has unfortunately been declared an “invader” by the New York State Department of Conservation, but nonetheless seeks to come to America and be treated like everyone else. He is, after all, considered a delicacy in his homeland.'

'Romeo and Juliet by William Shakespeare in a new version by Yu Chia Huang' was directed and adapted by myself and performed in Performing Arts Center, a big proscenium theatre contained 1035 seats in National Taiwan University of Arts. I adapted R&J in to 1935 Banqiau, Taiwan. In 1935, Taiwan was colonize by Japan, the story moved into the conflict between two posh families which related to Japanese government in Banqiau. This is my first theatre production involved bigger budget and larger casts, 24 actors on the stage.

'Morning, Morning' was premiered in the December of 2013 in National Theatre Taiwan, directed by Ching Hsiang Yang. 'Morning, Morning' was part of the annual National Theatre Experimental Theatre New Writing Festival project for 'What A Fandom: JAPAN'. The story is about a young girls idol group facing their problem of aging and their fear of not young any more. This is the first time I assisted a professional theatre project in Taiwan.

Directed 'Noises Off' By Michael Frayn In National Taiwan University Of Arts, Experimental Theatre Of Department Of Drama

'Noises Off by Michael Frayn' was my first school directing production. I worked as a director in this show and this is not only my first time worked a British Contemporary Play but also worked with comedy and farce. This show was also our 2 year BA study's final presentation as a free show, the first production for our class (year 2015) in Department of Drama of National Taiwan University of Arts.

My Directed and Created works

You can see the masks, puppets I made and shows I directed as follows,

You can see photos from 'Double Act' in Polka Theatre June 2018, 'Henry - A Work In Progress' by Bline Summit Theatre performed in January 2018, 'Holy Crab!' performed in Well Spring Theatre Taipei, directed by Ching Hsiang Yang in 2016 and 'Morning, Morning' performed in National Theatre Taiwan in 2013. 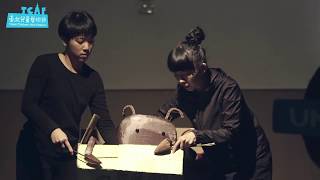 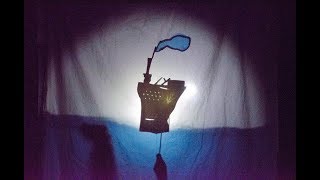 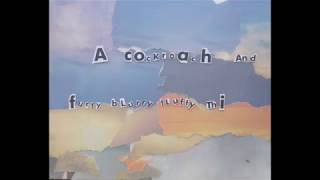